Hardly the most appropriate competition to be running at this time – spotted this afternoon  in Sainsbury’s, South Molton!

It’s a shame they can’t change the promotion so that for the sale of each of those items Sainsburys and/or Cadbury were to donate 5p to the Bahamas Disaster Relief Fund. 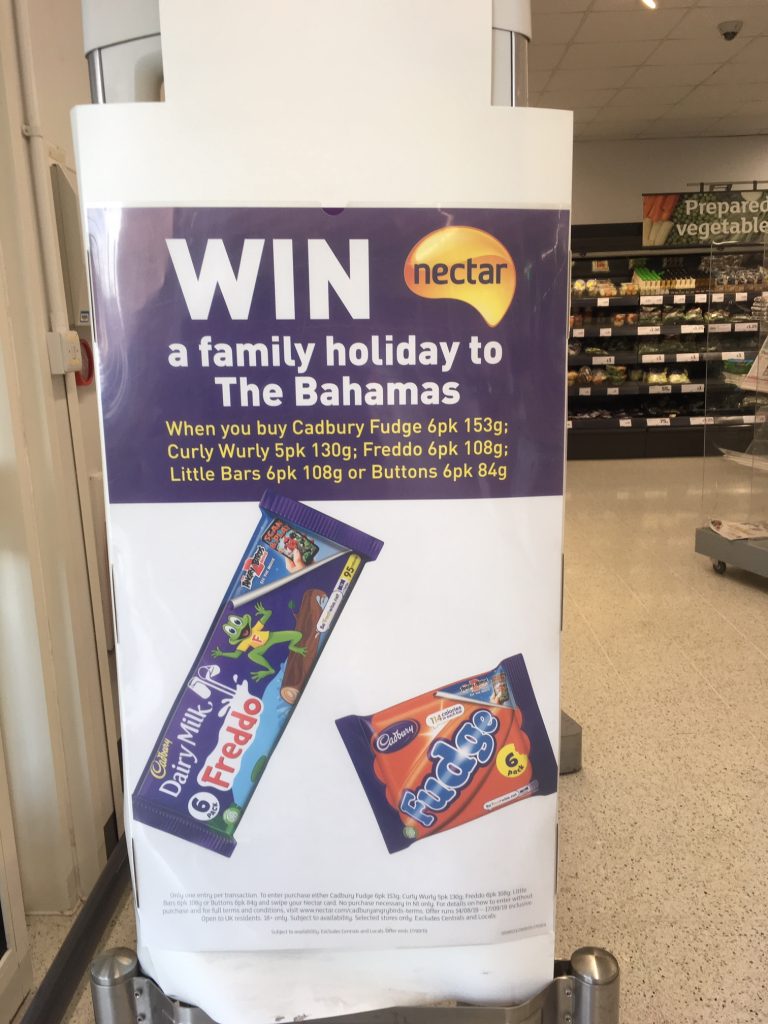 This is the text of an email I sent to my MP earlier today:

What the Prime Minister is doing in proroguing parliament is absolutely outrageous and an affront to democracy.

This is a very sad day for the United Kingdom when parliament is being subjugated by one person and his (unelected) advisers.

Any pride I had in my country has been swallowed by shame that the system allowed such an egregious liar to become Prime Minister.

The Conservative Party is making a mockery of democracy and you can be assured that it will never again receive a vote from me.

I wonder whether this happened upstream or downstream of the Sewage Works?

EDIT: It seems the incident was caused by anaerobic digestate  getting into the River Mole a few kilometres upstream of the sewage works.  It appears (according to unconfirmed reports) that heavy rain caused a tank containing the digestate to overflow and this, allied with low water levels in the river, killed the fish. If the water levels had been higher the spill would have been far more diluted and thus caused less harm.

We are investigating a pollution incident on the River Mole, near South Molton, after a member of the public reported seeing dead fish. At the moment we are not certain of the pollutant or the source. We have a team on site taking samples and gathering evidence. pic.twitter.com/qcMMtfdSZy

Here at last! The ATM machine is in place, the CCTV has been installed and now it’s just a question of testing it and filling it with money! So hopefully in a week or two it will be fully operational. 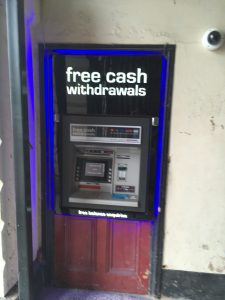 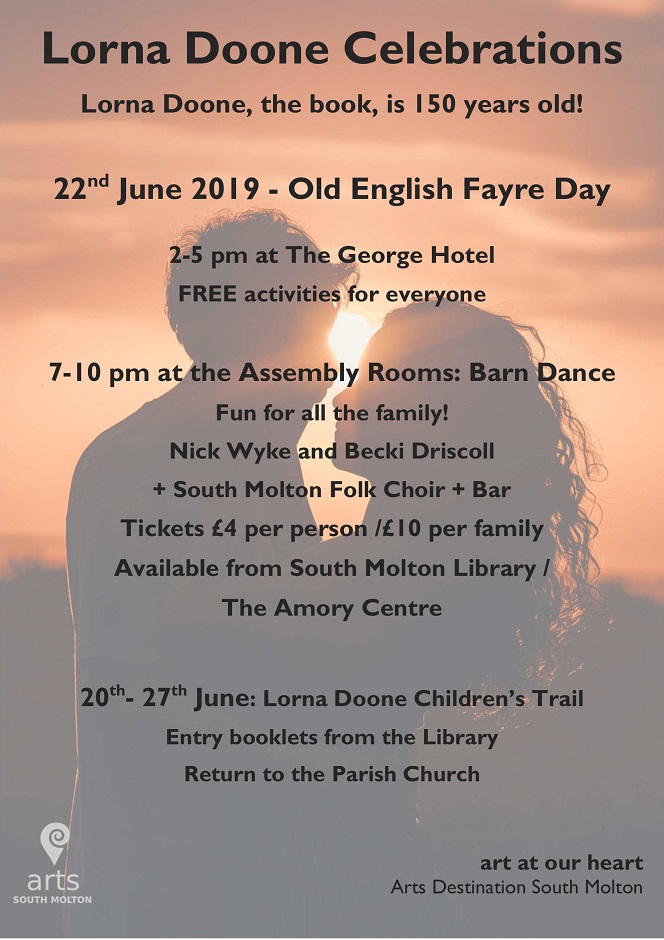 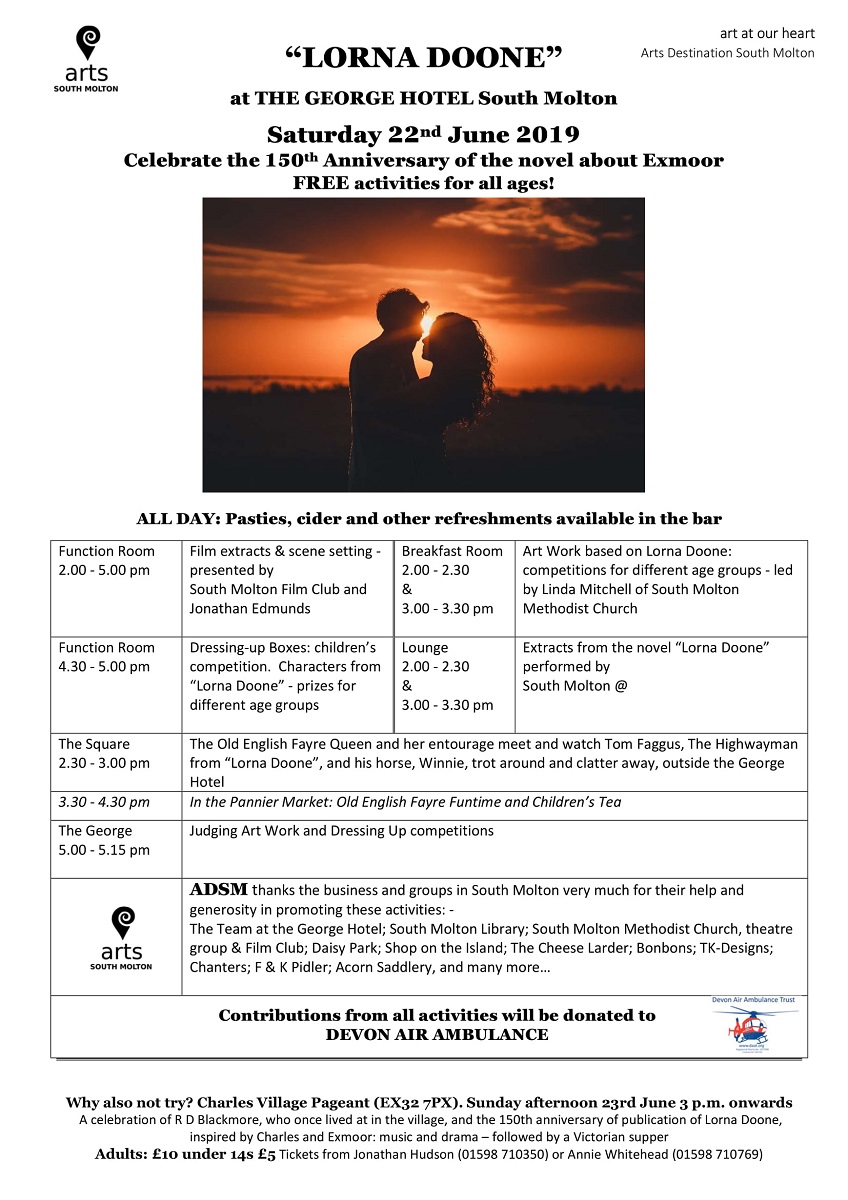 You’ll doubtless remember the giant 64m long fatberg which was recently found blocking a sewer in Sidmouth. This was dwarfed by the massive 250m long fatberg weighing 130 tonnes found in east London in 2017.

Fatbergs form when people put things such as fat, wet wipes, sanitary towels, nappies and condoms, down sinks and toilets.

In essence don’t put fat, grease, or oil down sinks, or anything other than the three Ps (pee, poo, paper) down toilets.

Love Your Loo is one strand of a new campaign by South West Water to try and minimise sewer blockages.

In essence it’s about the three Ps – pees, paper and poo – which are the only things that should be flushed down your loo.

Flushing anything else can cause blockages which can lead to flooding and pollution, and of course costs a great deal of money to deal with.

Unblocking sewers costs South West Water about £8.5 million a year – money which is paid by the consumer.

Even if you’re not connected to mains sewage you’ll still want to follow the rules.

The votes aren’t actually being counted until Sunday evening with the result being declared sometime after 10pm. This is because it’s apparently  a criminal offence for any country in the EU to publish exit polls, or any information about how people have voted during the election, before 22:00 BST on Sunday 26 May.  This is to avoid the voting in one country influencing the voting in another.

The first elections were held on Thursday in the UK and the Netherlands.  Ireland votes today (Friday), as does the Czech Republic. The latter also votes tomorrow, along with Latvia, Malta and Slovakia.  The other 21 countries vote on Sunday.

Why are the North Devon planning office so stupid at times? I know they’re massively overworked, but why put a planning site notice so far away from the site in question (the little garage on New Road just before the road to Sainsbury’s) when there’s a perfectly good place to put it very much closer? It’s also unsafe to read because it’s pinned on the telegraph pole so that it can only be read if standing in the road!

The planning site notice is the big white bit of paper on the left flapping in the breeze. This also begs the question Why are there two poles so close to together? 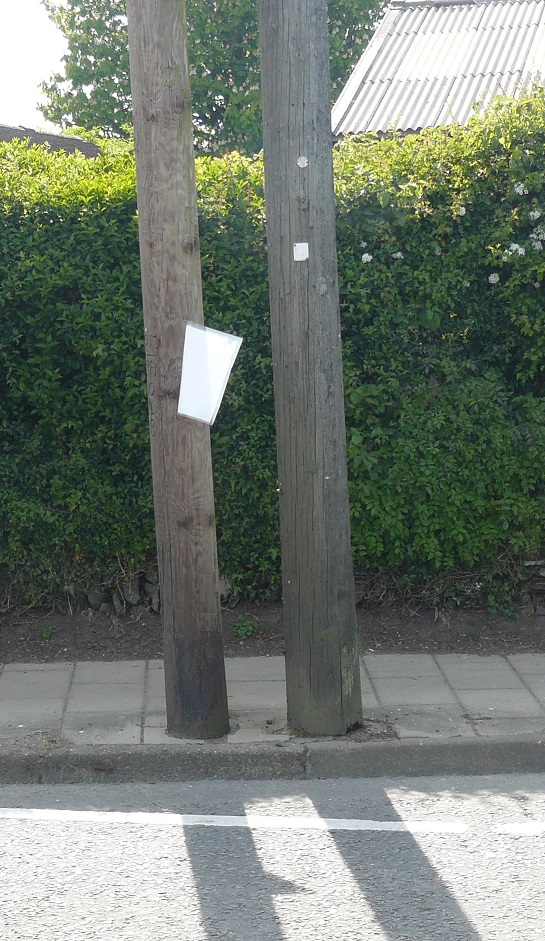 And no, it’s not for a house but for rebuilding the garage and turning it into a shed.

It was lovely to hear a young lad playing the piano in the Pannier Market today. All thanks to the Meddlers who thought it would be a good idea to have an old upright piano in there.